Leeds Victoria Gate (phase one) delivered a high-quality, vibrant retail environment that extends the established shopping quarter of Leeds while returning the anchored John Lewis department store to the heart of the city.

The original masterplan proposed an extension of the shopping district to accommodate a diversity of additional uses, including city centre residential allocation. An analysis of the changes in the development and retail market post completion of Victoria gate concluded that plans should now include residential and office uses, with only some leisure and retail. Listed buildings on the site are to be retained and re-purposed.

Working with Hammerson (developer) and ACME (masterplan architects;) Group Ginger have been invited to join Hammerson’s team to explore alternative uses and change of use opportunities for the listed structures to be retained on the Eastgate site. Group Ginger are reviewing the listed building assets within the masterplan area notably, National Deposit house and Lyons Works and their potential conversion to offices.

The approach explores the potential to develop a masterplan that can be delivered in a series of incremental phases delivered over time. The existing building assets have the potential to bring forward development in the short term, adding value and confidence to the remaining and wider masterplan area. These Key projects are being progressed in advance of other areas to secure inward investment. The team is working closely with the local authority and the Economic Development team responsible for bringing forward the delivery framework for the city’s Inclusive Growth Strategy.

The first phase of Lyons Works was built in 1914 by the Lyons family for their textiles and tailoring company Alexandres. The Lyons family started trading textiles in 1895, and the company Alexandre was established in 1906. The original red brick building was built in the Arts & Crafts style with an attractive multiple gable roof. The building has been extended twice, allowing the company to grow. First in 1925 when the original was copied and extended, and again in 1938 when a simpler expression was adopted. The linear building stretches from Templar Street to Lady Lane, an eighty-four-meter-long single building floor plate seventeen meters deep floor, set over three floors. Since the factory closed, the building has been used as a Chinese restaurant, Chinese shopping arcade, and nightclub. The building is currently vacant and in a state of disrepair. The building was a bespoke design intended to be more than a typical factory, with significant windows, roof lights and wind cowls providing ventilation and light.

Group Ginger’s design approach celebrates the unique aspects of the building and reinforces its original purpose as a factory. We have re-interpreted the factory as a multi-let, flexible environment capable of hosting multiple organisations and uses to complement the wider masterplan and new residential community. The critical challenge is the building proportion, length and depth of the floor plate. This aspect provides incredible spaces, and the design retains these proportions introducing a central circulation hub/atrium and perimeter cores to allow for multiple occupation and flexibility without vertically severing the building and cutting it into smaller parts which would lose the dramatic internal aspect. The floor-to-floor heights are relatively low and insufficient to allow for conventional horizontal services. The vertical perimeter cores allow for key service distribution and enable the structure to be exposed so that the original character of the building dominates the interior. The setting of the building within the masterplan has been considered with the provision of a new public space externally revealing the elegance of the façade and reducing vehicle movements. This controlled context enables the building to be naturally ventilated without having to mitigate the negative aspects of noise and pollution. The simplicity of this approach is both cost-effective and less detrimental to the original building. 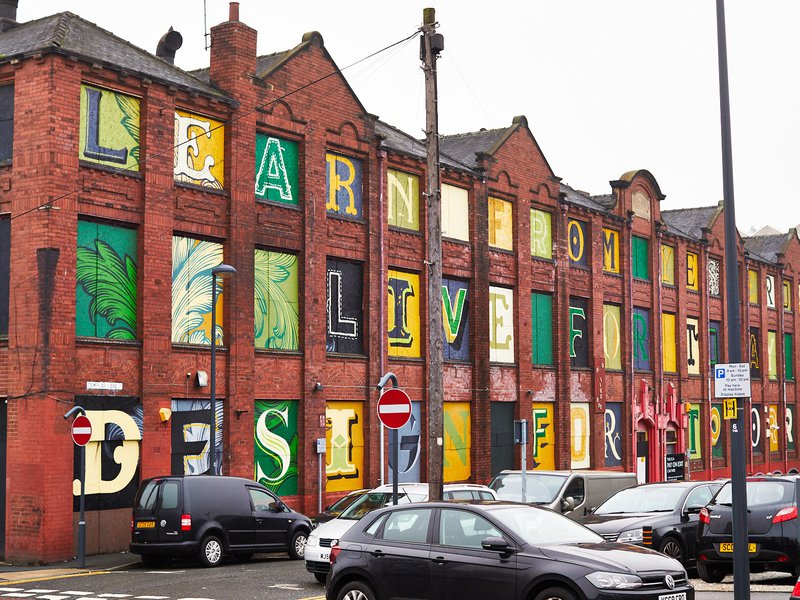 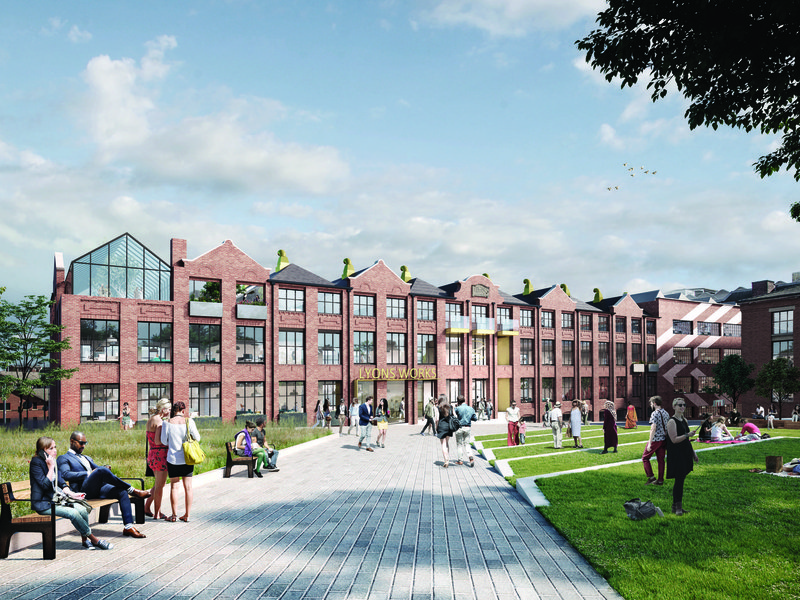 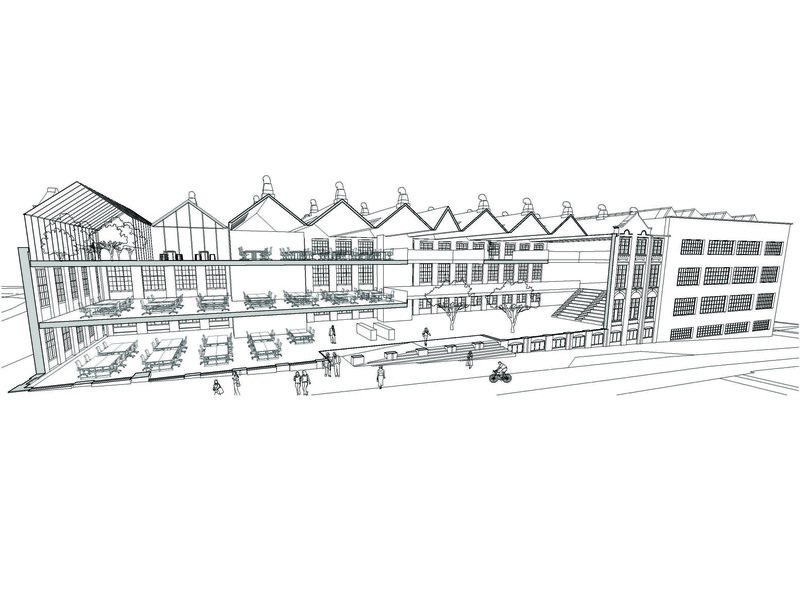 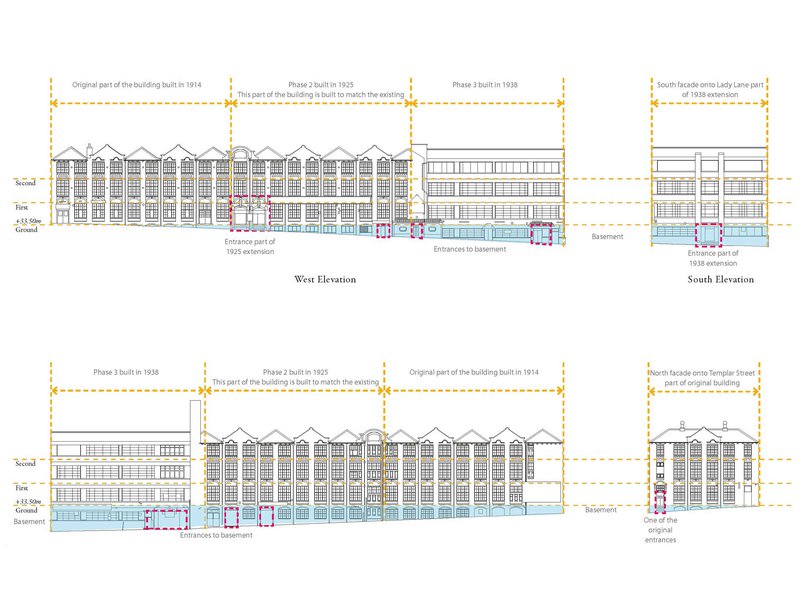 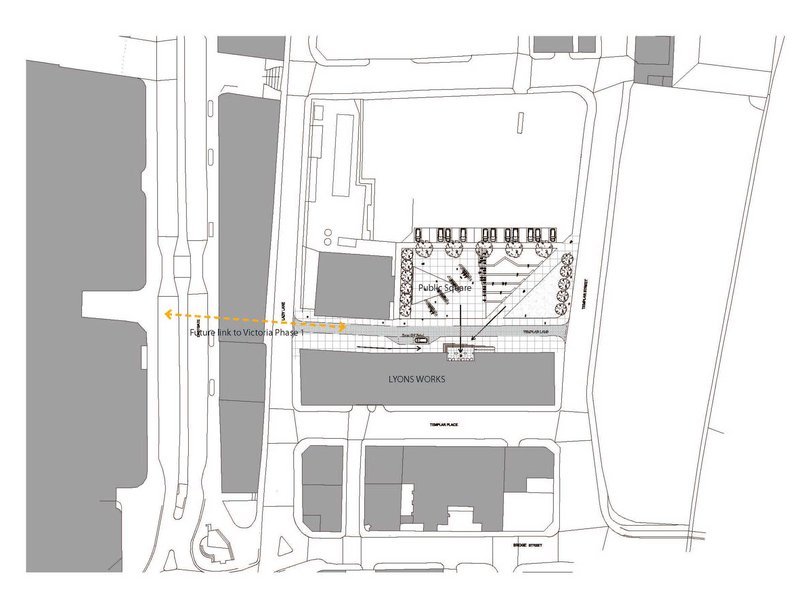