Architecture often reflects the economic, political, social and cultural context we live in. The former Headquarters building of the Tetley Brewery reflects different influences and ideas pertinent to the time when it was built and now through its refurbishment.

Constructed in 1931 in the midst of the Great Depression, the Headquarters has been described as an example of British Art Deco architecture. It is not the most exuberant expression of the artistic influence which emerged from the Exposition Internationale des Art Decoratifs et Industriels Modernes held in Paris in 1925. More striking examples are the designs by Harry Weedon for Odeon cinemas which evoke the style of the thirties, Hollywood and Busby Berkeley musicals or the Blackpool Pleasure Beach by Joseph Emberton. Art Deco was a design style that conjured fantasy and escapism at a time, in the midst of depression, when the world was probably a very grim place.

The Art Deco style not only reflected a desire for escapism but was a response to a changing society with new materials and advancing technology. Showpiece buildings were constructed to promote the companies they housed. The style was adopted by organisations to demonstrate how modern and up to date they were. Architecture celebrated achievement by expressing grandeur, scale and longevity. The Royal Institute of British Architects, at Portland Place in London, completed in 1934 by architect George Grey, is an example where the adoption of Egyptian-influenced Art Deco reinforces the institution’s importance. Leeds has similar examples of the architectural demonstration of stature, such as John Marshall’s Egyptian inspired Temple Works. Although built long before Art Deco, it adopted a style of architecture to symbolise Marshall’s achievements.

The confidence of the Tetley family in creating such an edifice as the Headquarters building during the Depression was clearly well founded as the brewery flourished, prospering to become Leeds’ largest brewer and through mergers in the sixties to become Allied Breweries, the world’s largest brewing conglomerate. The scale of the business and eventual size of the brewery sometimes detracts from the origins of the beer and the authenticity of its taste. Tetley's ale was brewed in Leeds from 1822; it was literally a product of its location using water from the River Aire and traditional brewing methods, such as Yorkshire Square fermenting vessels. But advances in technology meant that those industries which were once reliant upon natural resources no longer had to be place-specific and now have greater flexibility when considering their location. The unique characteristics of the local water which defined the flavour and distinct quality of Tetley’s real ale can be manufactured in the laboratory, meaning Tetley’s Original could be brewed in Honolulu as well as in Leeds. Consequently global organisations are free to evaluate their structures and determine the most efficient means of production.

Today’s stalled economy has paused the development cycle for the former brewery site, potentially valuable real estate. If it were not for this hesitation the current transformation of the Headquarters into a cultural hub may not have been realised at all, or it would perhaps look quite different from the spaces presented today. Buildings to an extent represent the inevitable political circumstances behind their production, and the Headquarters building is no exception. Just as it originally represented ambition, the need for certainty, security and a positive assertion, its current manifestation as ‘The Tetley’ is illustrative of its new user and the economic circumstances in which it finds itself.

The Headquarters now sits in almost woeful isolation surrounded by a sea of cars where the production facilities of the brewery once stood, adjacent to other un-developed land. There just isn’t the interest, confidence, value or appropriate circumstances currently to secure the long-term legacy of the Tetley site. The original building’s architectural quality and a sense of nostalgia for Tetley’s Brewery have preserved the Headquarters as a physical island and a moment in time.

Moments of decline within cities create a state of flux, they become moments of transition where the temporal condition creates the circumstances for new opportunities and interesting inhabitations of space. Nigel Coates, in his essayNarrative Break-updescribes creative action as a means to change normal modes of occupation:‘artful under privilege had made wealth more or less unnecessary; declining cities meant you could invent the way to use them.’ [1]

Project Space Leeds, [PSL] has become the building’s new user, the ‘artful under privileged’ who re-invent the Headquarters and exult in the moment. PSL’s proposed inhabitation was to create a new art gallery for Leeds, but one that wouldn’t become an institution. To genuinely reflect PSL’s creative ethos, one focused on process and production, the place needed to become a cultural hub retaining the freshness and vibrancy of its occupants. This needed to be more than just moving the art in.

The building itself required extensive repair and re-appropriation to make it useable. There was an interesting relationship between repair and occupation. An opportunity for PSL to scale up their operation from the single activity of displaying art in a large retail shell such as their previous home at Whitehall Waterfront, to inhabiting a building with multiple functions and much more extensive opening hours. This was an opportunity to create an immersive environment.

As Architects we have consciously manipulated the budget for repair to make the spaces appropriate to their new but not permanent end user. We didn’t want to create a clean shell and the budget dictated that the project would never be resolved as a unified whole. We did however want to claim the space and introduce a revivifying architecture with demonstrable insertions.

We wanted to strip the building back and remove a number of the functional yet poor adaptations that had occurred over the years. The brewery itself had been detached from the rear of the building exposing the back elevation and leaving the scars of bricked-up window openings. In the fifties the original atrium had been filled in at first and second floor level, leaving a space with no natural light and no ventilation. The central staircase, once open, was now enclosed. All of these mistakes were corrected and to acknowledge this achievement we held a ‘bottoming-out’ party. This was similar to a conventional topping-out ceremony where the creation of a new structure, the armature, is celebrated. We wanted to mark the point at which the building had been stripped of its previous occupants’ remnants before new adaptations were introduced. By stripping the building back to reveal much of the original architectural diagram we created a sense of consonance - only then to destroy it by introducing something alien to this harmony. We introduced a large ‘canvas’ (stud) wall. Our architectural intent was to retrieve the original and then alter it through addition to create a new sense for the building. We wanted the old to read with the new. We wanted the building to be familiar yet foreign at the same time.

Our insertions were by no means arbitrary; they were designed to be of a scale which challenged the strength of the existing but were also about keeping a sense of the past - abandoned and celebrating a new use, user and function. Where the building’s architecture had once been about escapism we wanted it to become an experience. We were interested in the story of the user rather than a narrative style. We envisaged a place such as that described by Richard Florida, ‘where it is hard to draw the line between participant and observer or between creativity and its creators. [2]

The aim was to turn the Headquarters into a project space, acknowledging the fragility of its function and making it accessible. We never felt that an architecture of institutionalism and authority or the purity of the modern were relevant. The project couldn’t be perfect as this would somehow lose the potential of the fourth dimension. The accessibility of the building was not only about moving the spaces around, but also allowing users to feel a sense of engagement: ‘We wanted to preserve a kind of primitive freshness that architecture normally edits out.’[3]

To an extent we liked the idea that the project wouldn’t be finished or rather that there would be a differential spend of the budget. Some spaces would be more finished than others depending upon use and user and the generosity of an ever increasing number of donors or sponsors. Parts of the building are literally un-finished; left in a raw state so that the whole project is open to future adaptation. This creates a sense of latent potential and the ability of the building to evolve further.

As Architects for this phase of the adaptation we are one of multiple authors; the original Architect, the previous occupiers, the owners, the new occupants, the visitors, the artists and so on. Each author has contributed to the composition. Joshua Comoaroff and Ong Ker-Shing might refer to the Tetley as an ‘Exquisite Corpse’: ‘The exquisite corpse is a type of horror through which another problem of singularity and collectivity – the death of the unified building – is expressed’.[4]

We have opened the building up, making sense of it spatially, and introduced natural light. The canvas wall asserts the new use and continually orientates the visitor. It is now possible to experience the whole building and to read it as one multi-layered entity. We have introduced an order, creating a construct or compositional method which allows event, accident, history, and character to co-exist. Rather than diluting the whole these add to it and define its character. This isn’t a single narrative but multiple stories which reflect the history and fortunes of the building - importantly for its users. As Architects we have adopted an approach equivalent to collage.

Other spaces for art with similar characteristics are the Palais de Tokyo in Paris and Prague’s Meet Factory. In both, the occupant doesn’t sense the assertion of the architect as the spaces are live and reflect the programme of activity and events being curated. The Palais de Tokyo is an Art Deco building that dates from 1937. It reopened in 2001 with a new interior designed by French architects Anne Lacaton and Jean-Philippe Vassal which reflects a rough and ready style. There is no permanent collection. Instead, dynamic temporary exhibits by experimental artists are spread over a large, open space reminiscent of a construction site.

The architectural intervention at Tetley’s creates a construct within which activity and artifice can be curated. Neither immaculate nor perfect. Examples of perfect, flawless spaces, such as the top of Norman Foster’s ‘Gherkin’, a geometrically perfect diagram, cannot be added to without engendering a sense of vandalism. The Tetley in contrast is flawed and ugly yet beautiful. The project goes beyond aesthetics to be about sensation and is a space which will continue to change, almost encouraging creative vandalism. Our aim as Architects has been to make big moves which heighten the experience of interaction and use, to create a home and a stage where Project Space Leeds can live, encourage and inspire. The Tetley is a celebration of individual creative entrepreneurialism and not big business. 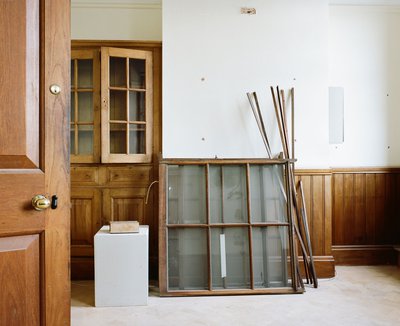